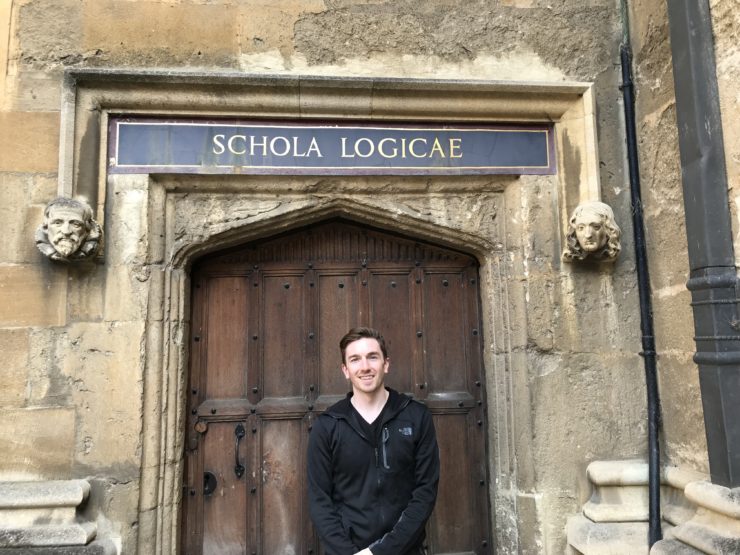 You’ve been working on the Fair Limits project for almost a year, how is it going?
It is hard to believe that it’s almost been a year. Then again, time flies when you are having fun, and I’m happy to report that I’ve quite enjoyed my first year on the project, at the Ethics Institute, and in the Netherlands! I feel fortunate to be part of a joint project, and especially with the team we have, because I think that softened the personal transition required after landing in a new country and starting from scratch. It has been nice to have access to all of the European philosophy networks and conferences that are just out of reach when back in the States, and I’ve been fortunate enough to expand my interaction with researchers, non-profits, and policy folks outside of philosophy, which, as you will see in my next answer, I think is important for my philosophical project itself! I would not have anticipated that being a philosopher in Europe would somehow involve me wearing a toga at an arts festival doing a “veil of ignorance” experiment, but even that was a pleasant surprise.

What is currently the focus of your research?
My wing of the project is oriented around two main sets of questions and themes. The first has to do with methodologies for doing so-called “non-ideal” political philosophy. I tend to think of this as how to go about navigating the need for answers that are normatively defensible, but can actually guide action in the real world as it is now, which is awash with bad actors, ignorance, non-compliers, etc. In addition to thinking about how to deal with disagreement and the role of value pluralism, I’m working on ways in which this project might have to be radically more interdisciplinary than we might have thought. The second main area I’m focusing on regards questions about the agents responsible for realizing justice. This extends my dissertation’s effort, with respect to its focus on climate responsibility, to weave together individual and various collective levels of responsibility with respect to fair resource appropriation and towards the creation of just institutions.

The Fair Limits project seems highly relevant for our day and age, what do you hope to contribute to society?
I suppose my biggest hope is that the project can serve as a small part of the intellectual foundation in a growing public debate about economic and ecological justice. If we can provide inroads for raising issues about inequality, fairness, resource limits, the justifiability of our institutions, etc., in the public sphere, I think that will be a good thing. The political and media environment today is one that rewards big and bold yet simple and easily digestible ideas for its agenda-setting. I think there is an opening for the kind of ideas and work we are doing in the project, and partly the shift in metaphor and narrative towards an explicit focus on limits, to be on the front lines and play an integral role in seeding, sparking, or supporting much needed public deliberation and political action aimed at distributive justice.

From Nederland, Colorado to Nederland, Europe: was it a culture shock?
Fortunately, I had travelled a decent amount and had some years during my Ph.D. de-camped in Washington, D.C. to provide a bit of a buffer, because I think had I moved straight from the Colorado mountains at 9,000 feet to sea-level here in Europe, I would have had significantly more culture shock. Utrecht is far more manageable than D.C., and the biking is infinitely easier, so by that measure, the biggest culture shock was already behind me… Of course, uprooting across an ocean was always going to bring its fair share of challenges as I adjusted to the distance from my family and closest friends, and the subtle day-to-day habits that make up a sense of “home,” but I feel lucky to have landed in a nice, welcoming, and rewarding academic environment. Not to mention, there is a surprisingly good dance community in Utrecht, which is one of my main “extracurricular” hobbies, and something you never know about in a new city! So I can’t complain!

What recent book or article is a must read?
It is not so new anymore, but if people haven’t read Dale Jamieson’s Reason in a Dark TimeI think it qualifies as a climate-related must read. More recently, in the wake of the IPCC’s 1.5°degree report (which you might also explore), I would also suggest everyone read some of the great science journalism that accessibly assembles what is at stake between the 1.5° and 2° targets (among other places, e.g., here). More squarely in the climate justice literature, I would also suggest a volume edited by Clare Heyward and Dominic Roser, Climate Justice in a Non-Ideal World. And finally, given what I said above about interdisciplinarity, and given the stakes of the world-historical catastrophe of climate change (among many other moral disasters we face), I think I can’t but take this opportunity to push people somewhat more towards literature on activism and resistance. There’s plenty in the nonviolence literature that I would love to share, but perhaps I’ll just point towards Srdja Popovic’s 2015 Blueprint for Revolution.